Coal mining has always been an important part of Longyearbyen, though of decreasing importance today. The significance of coal mining is immediately visible for every visitor to Longyearbyen, as old coal mines can be seen in many places near Longyearbyen. Some of these old mines, such as mine 2B above Nybyen, locally known as julenissegruve (Santa Claus mine), are popular sites for walks both for locals and visitors. The old mining installations are interesting, often with scenic views, and fascinating for photographers.

The opportunities have recently been greatly reduced. Parts of the roof of a conveyor belt of mine 6 in Adventdalen have collapsed and the whole mining facility at mine 6 has been closed to the public.
It is said that it will be made accessible again after dangerous parts have been removed or secured. Large parts are still intact. But there is currently no time plan and nobody can say when the mine will be opened again for visitors. The difficult economic situation of the mining company, Store Norske Spitsbergen Kulkompani, does not make it easier. At least everybody involved is aware of the high historical and touristic value of the old mining installations, which are partly protected as part of the cultural heritage. This means that several authorities have to be involved in any work to clean up or secure the mines, something that is unlikely to speed up the process.

Currently, mine 1A (“American mine”, above the church), 2B (“Santa Claus mine”, above Nybyen), 5 (Endalen) and 6 (between Todalen and Bolterdalen) are closed until further notice.

At least, mine 3 is currently accessible as a museum for guided groups.

Mine 2B (“Santa Claus mine”) near Longyearbyen is amongst the old mines which are now closed for visitors. 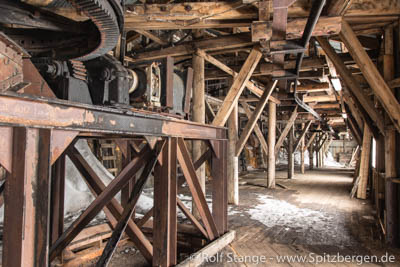