Hauke Trinks was not only a scientist, but also a Spitsbergen adventurer. He wintered three times in remote places northern Svalbard. Born on Februar 19, 1943 in Berlin, he became president of the Technical University in Hamburg-Harburg. After finishing his scientific career, he had more time for his passions, sailing and adventure.

In 1999-2000, Hauke Trinks wintered on his own on his yacht Mesuf in Mushamna in Woodfjord. As a scientist, he wanted to find evidence for his theory of an origin of life in the ice. Two more winterings followed, in 2003-2004 in the old station in Kinnvika on Nordaustland and in 2010-2011 once again on his boat in Mushamna. On these two later winterings, he was accompanied by Marie Tiéche. Hauke Trinks told his arctic adventure stories in several books and documentations to a wider public. There has hardly been a visit to Woodfjord since without the question coming up: “isn’t it somehwere around here where Hauke Trinks wintered?”

It is up to dedicated scientists to judge his efforts and results as a reseracher. Opinions regarding this may be varied, but that does not matter now and here. As a person, Hauke Trinks easily felt at home in Spitsbergen, something that was very evident during several meetings this author had with Trinks in Mushamna, Kinnvika and Longyearbyen. To share just one of these unforgettable moments: when we approached Kinnvika with MV Professor Multanovskiy in the late summer of 2003, when Hauke and Marie were just settling down there for there wintering, they quickly jumped into their Zodiac and took off to disappear deep in Murchisonfjord as they saw us coming. But as we were about to leave, they returned quickly and Hauke, being a good narrator, was happy to share stories and knowledge with us.

Hauke Trinks kept a strong connection to the north and settled down in his new second home on Utsira in Norway. He died in December 2016 at the age of 73 in Spitsbergen or on Utsira, the sources are not yet quite clear about this. We will keep fond memories of him as one of few adventurers who, in recent years, ventured on month-long expeditions on his own or with just one more person into the polar night and the ice, following a scientific quest, and as a unique, very likeable character. 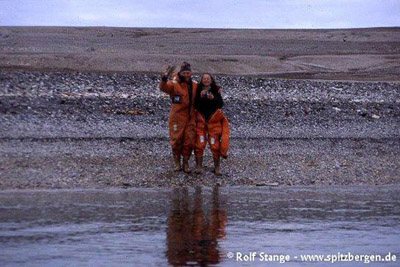