If Santa Claus does not bring gifts on Saturday, that could also be due to his reindeer. Whether they can pull the sledge heavily packed with gifts is questionable. Because the reindeer on Spitzbergen are getting thinner!

The subspecies – the Svalbard reindeer – is already somewhat smaller than their relatives on the mainland. 135 animals were weighed by the researcher Steve “Mister Reindeer” Albon from the James Hutton Institute in Scotland since 1994 every year in April. Rudolph Normalrentier lost seven kilos during this period. Reason is that the animals find less to eat in winter. 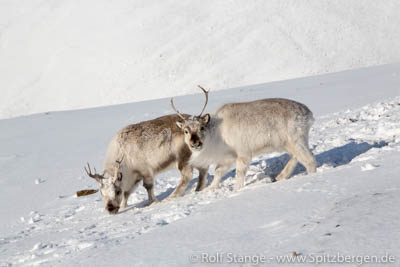 And who is to blame? Most likely once again climate change. Because of higher average temperatures it rains on Svalbard more often than it snows. The rain freezes and forms an ice layer on top of the snow. This makes it more difficult for the reindeer to come to the lichens, of which they mainly live in the winter.

Nevertheless, this does not seem to affect the population: Since the 1990s, the number of Svalbard reindeer has risen from 800 to 1400 in the Adventdalen. What actually sounds like good news could lead to a famine among the reindeer in the long term as the competition for food increases.

We keep our fingers crossed for Santa Claus and his reindeer, and in any case wish everybody a Merry Christmas!