The weather forecast for Longyearbyen says strong wind increasing to full storm during the night to Thursday, combined with strong snowfall. This weather situation means an increased risk of snow avalanches. The current avalanche warning is level 4 on a scale of 5 levels. As a consequence, the Sysselmannen has decided to evacuate Nybyen.

Smaller snow avalanches on the slopes surrounding Longyearbyen are exepcted, but so far no major events that may cause damage damage to buildings. Nybyen, Longyearbyen’s upper part, is faced with the greatest risk, hence the precautionary evacuation. Nybyen is mainly used for student housing and guest houses, but there are also a few flats where locals live. Most students are currently at home elsewhere and not in Longyearbyen. The road to Nybyen is closed from the school. It is strongly advised to resign from any field trips.

Other parts of Longyearben are currently not concerned by evacuations. This includes the residential area near Sukkertoppen, which was hit by an avalanche in December 2015 with lethal consequences. The development will be constantly monitored by the Sysselmannen and relevant institutions.

Longyearbyen during the polar night. The steep slopes surrounding the settlement can produce avalanches. 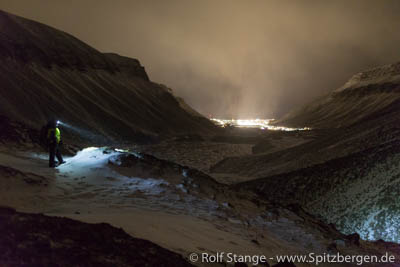