For some researchers in Spitsbergen, there is nothing more exciting in winter than lying in the dark and cold for hours on a floating pontoon and illuminate the supposedly dark, lifeless sea with a torch. The sea in the polarnight is not as lifeless as one might think. Now, researchers have even discovered a new species for Spitsbergen: the Helmet Jellyfish (Periphylla periphylla) appeared a few days ago suddenly in the torch light of researcher Sanna Majaneva.

Sanna Majaneva explores life in the sea in the dark season in the north of Spitsbergen. Together with the two professors of marine biology Jørgen Berge and Geir Johnsen from the University of Tromsø (UiT) and the Norwegian University of Science and Technology (NTNU), she surprisingly caught the jellyfish, which is now being investigated more closely.

The Helmet Jellyfish, which can be up to 30 centimeters big, is actually a very light-sensitive deep sea jellyfish and comes only to the water surface at night. A night that lasts for several months must be pretty convenient for such a jellyfish. The “princess of darkness” has a reddish body that glows from the inside; it can be up to 30 years old, which is not bad at all for a jellyfish. 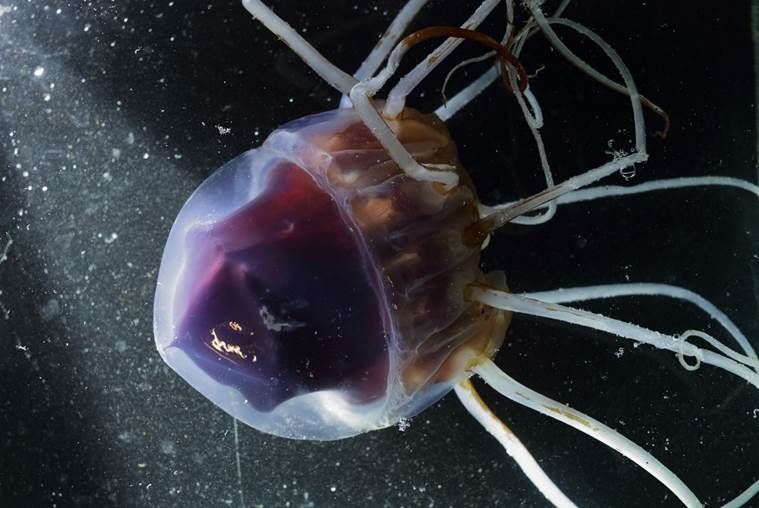 A reason for the appearance of the Helmet Jellyfish in Spitsbergen’s coastal waters could be that increasingly warmer waters are pressed from the Atlantic to the north, as Professor Jørgen Berge is reasoning. This phenomenon is also responsible for the fact that both Isfjord and Kongsfjord have remained largely ice-free in recent winters.

On the coast of the Norwegian mainland, the Helmet Jellyfish has been growing in ever larger quantities for several years and it has been affecting the ecosystem there. It feeds on krill and small fish and seems to drive away many fish from the fjords.

“The appearance of the Helmet Jellyfish is a warning that a system is changing, and we will gradually discover new species here in the north, and formerly local species may retreat or disappear”, fears Professor Jørgen Berge.

But perhaps a new source of food can also be discovered: in Asia, the Helmet Jellyfish is a healthy delicacy, since it contains iodine, iron and calcium. The Helmet Jellyfish should be good for the blood circulation and a beautiful skin. Well then: Enjoy your meal!