Home → * News and Stories → Polar bear family was in Longyearbyen

Polar bear family was in Longyearbyen

The polar bear family that has kept Longyearbyen excited and the Sysselmannen busy over several days now stays in the vicinity of town and has even been within Longyearbyen last night.

A first attempt to move them away in Adventdalen towards the east on Saturday night proved unsuccessful. Then the Sysselmannen tried to move them to the northwest, along the northern side of Adventfjorden towards Revneset. The bears then settled down in Adventdalen, not far from Longyearbyen.

During the night to Tuesday, the have been in the lower part of Longyearbyen. Footprints were seen near the UNIS/Svalbardmuseum building, an area with a lot of traffic and within a few hundred metres of residential areas.

Further tracks were seen near Isdammen (the lake at the road in Adventdalen) and at 06.15 the three polar bears were seen in Adventdalen near Endalen. The police (Sysselmannen) is out with all available forces to observe the polar bears to make sure they are not getting close to inhabited areas again. The poor weather with wind, drifting snow and darkness makes the situation in Endalen quite challenging. Helicopter assistance is currently not available due to the weather.

People are urged to be alert as long as the polar bear family is in the area.

Endalen in darkness with light snow drift. It is hard to see animals unless they are really close. Good this was a dead reindeer and not a live polar bear. 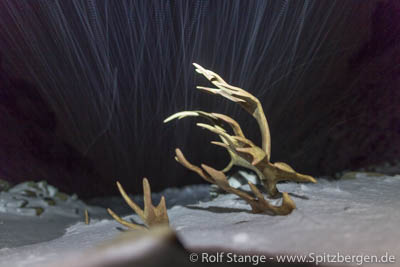