On Sunday (August 6) morning, a private yacht got into a dramatic situation at sea in Svalbard. It took water and was not far from sinking. Three persons were on board, all of them German. They are all well now. The incident took case near Dunderbukta, at the west coast of Spitsbergen south of Bellsund.

Shallows and exposed shorelines: the west coast of Spitsbergen can by very inhospitable. 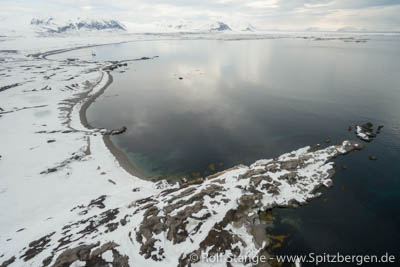 The crew called for help via German rescue services, who alarmed the Norwegian authorities. The three, who were already on board their life raft at that time, were then taken on board the Norwegian cargo ship Norbjørn. Norbjørn also started to tow the sailing boat. The three rescued persons remained on Norbjørn for the passage to Longyearbyen, which they preferred rather than a flight on the helicopter which was soon on the scene. Their sailing boat was towed to Longyearbyen by the pilot boat from the port of Longyearbyen.

It turned out that a hose that connected a septic tank to the hull had got loose, enabling water to rush into the boat.

According to the Sysselmannen, the case will be handed over to the insurances without further police involvement.