Summer hiking route up to Larsbreen destroyed by landslide

The mountains and glaciers around Longyearbyen have a lot of great hiking opportunities. Right now it looks like there is one less: the western part of the moraine of Larsbreen, which is part of the popular summer route ascending Larsbreen towards the glacier itself or the near-by mountains (Trollsteinen, Sarkofagen) has been strongly affected by landslides this summer. This is generally a natural process in a moraine area that consists of a thing layer of sediment resting on steep slopes of clear glacier ice. The area had already been affected by minor landslides in recent years.

This summer’s landslides took the area with the hiking route from Longyeardalen up to Larsbreen. Now, there is a steep slope of mostly exposed glacier ice covered with a thin layer of sediment (mud and stones). The “way” below the slope is exposed to further landslides and rockfalls and hence currently not a safe alternative.

It remains to be seen if the winter route can still be used. Winter and summer routes are slightly different and frost and snow change the terrain significantly. Meanwhile, Longyearbreen and Vannledningsdalen remain generally available as hiking routes up to Larsbreen, Sarkofagen and Trollsteinen.

View from Gruvefjellet to the moraine of Larsbreen. The area recently affected by landslides is roughly marked by the red circle (the photo was taken before these landslides happened). 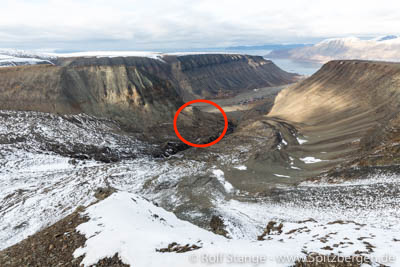