There have been strong winds up to storm force in northern Spitsbergen yesterday (Monday). Two smaller boats seem to have gotten into potentially serious difficulties. Emergency signals have been triggered and search and rescue forces are in the area with helicopters and coast guard ships.

SV Antigua (where the present author is on board) is also in the area, but we did not have more problems than some cases of seasickness during our sailing passage yesterday. So SV Antigua is NOT affected by any serious problems.

Update: after several hours searching in the northwest of Spitsbergen, where also several tourist ships including SV Antigua assisted, the boat was on Tuesday found „in good condition“. The SAR mission was officially abandoned by the coast guard. It was later stated that it was a local boat from Longyearbyen. The emergency signal position was from Magdalenefjord, while the boat was found in Wijdefjord, almost 100 km away as the ivory gull flies. The emergency signal had been trigger automatically without the crew being aware of it; probably, the emergency beacon was lost in heavy seas and triggered itself.

Wind force 8 on Monday at the north coast of Spitsbergen. Photo © Alexander Lembke. 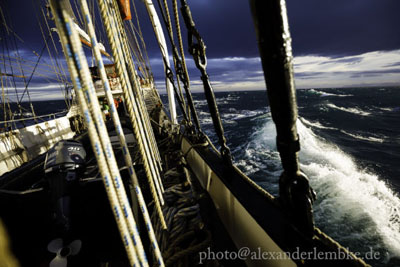