After the search after a sailing boat last week, SAR (search and rescue) forces from Sysselmannen and Red Cross were, only a few days later, again out on a major mission. On Saturday afternoon at 16.20 hours, the local hospital in Longyearbyen received a call from an Italian person who was stuck on a steep slope and not able to move. The man said that he could see the airport, without giving further details about his position. Next to lack of local knowledge, language difficulties may have come in here. He finished the conversation without leaving his name or contact details, so it was not possible to contact him again later.

Hence, SAR forces had to move out in darkness and strong winds. The Red Cross searched Platåberget, which is situated near the airport, with about 30 people. Finally, a light signal was seen on a steep slope above the sea on Fuglefjella, between Bjørndalen and Litle Bjørndalen. Strong winds prevented SAR forces from reaching the area by helicopter, so the Red Cross had to walk a longer distance to get to the site. Shortly after 5 a.m. the man was finally rescued; he had spent at least about 13 hours in his position. All involved got back to Longyearbyen thereafter in good condition.

The incident shows how important it is to have at least basic local knowledge and means of orientation as well as the ability to make a proper emergency call if worst comes to worst. Next to some knowledge of a language used locally, or at least a contact who can provide that, this involves the correct local emergency contacts (the Sysselmannen), name and phone number. The man was in very steep terrain, in darkness, strong wind and without local knowledge and orientation. The incident provides a negative example in several ways.

The steep slope of Fuglefjella between Bjørndalen and Litle Grumantdalen on a nice summer day, where an Italian tourist was rescued early Sunday morning in darkness and wind. 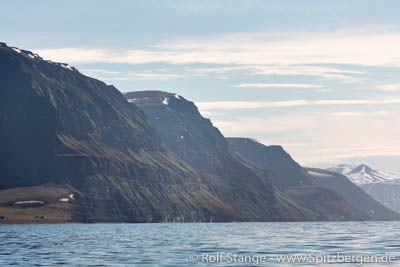