The Russian helicopter that crashed on Thursday afternoon is probably found. Search-and-rescue forces sensed a strong smell of fuel and saw air bubbles coming to the water surface at a certain position in the area in question, in Isfjord, about 2-3 km from the helicopter base at Heerodden. A ship has found an object on the sea floor with the echolot that could be the wreck of the helicopter or a part of it. This needs to be confirmed, though. The depth is between 200 and 250 metres, far beyond the reach of divers.

Already during the night, a diving robot (ROV = Remotely Operated Vehicle) was brought from mainland Norway to Longyearbyen with a SAS plane. The ROV will be operated at the alleged accident site as soon as possible. This has probably already happened at the time of writing (08.30 local time on Friday morning) or it may be going on right now.

There were 8 persons on board the helicopter, and the search after survivors is going on. SAR forces are searching the nearby coast, east of Heerodden. Helicopters and ships are scanning the water. According to all that is known, the worst has to be feared, but all efforts are taken to find survivors. The Russian helicopter was of the type MI-8, which is equipped with a life raft and with lifting bodies that keep the helicopter afloat at least for a while in case of a controlled emergency landing on the water surface. The fact that no emergency signal was released by the crew makes it however doubtful that it was a controlled emergency landing. A sudden, uncontrolled crash seems likely. Witnesses say they have heard a loud noise like a bang at the time in question.

Next to the 2 Norwegian SAR helicopters, there is a number of ships and boats in the area: Polarsyssel (Sysselmannen), coast guard and boats from the tourism industry in Longyearbyen. Initially, the visibility was reduced by snow fall, but the weather is by now quite good, with little wind and clear visibility. The polar night has begun a couple of days ago, so even around noon, the sun remains below the horizon, making light very scarce.

Light conditions in Isfjord during the polar night around noon. The bright light is the moon. (Archive image.) 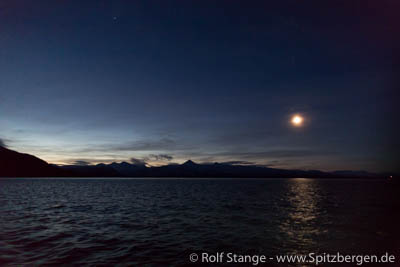