The first edition of my guidebook Spitzbergen-Svalbard came out in German in 2007, followed by the first Englisch edition Spitsbergen-Svalbard in 2008 and the first Norwegian edition Svalbard – Norge nærmest Nordpolen in 2017. The German version soon became popular amongst Spitsbergen-travellers and enthusiasts, so I could develop the book through several editions. The 5th German edition came out in 2015 and it is now out of print, the new (6th) edition of the German version is currently in print and expected to be available in September 2018. I have updated the book comprehensively, both the text and the index have been improved and enlarged so the new edition will have 580 pages (the old edition has 560 pages). Maps and fonts have been improved. My knowledge and experience keep growing also after more than 20 years of learning and living the Arctic in theory and real life and all this becomes part of updated editions, and so does new relevant legislation, recent developments in Longyearbyen and so on and so forth. 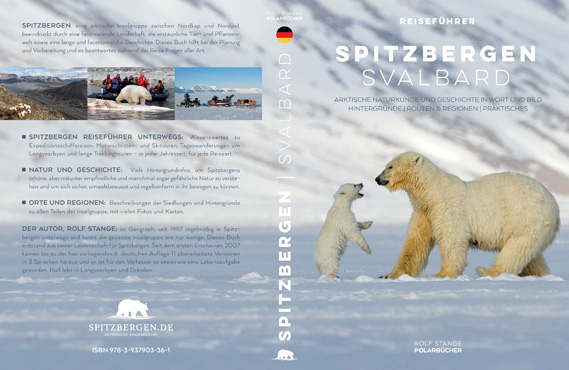 The newest German edition of the guidebook Spitzbergen-Svalbard is in print and due to be released in September 2018.

Many professional guide colleagues use this book (including its English and Norwegian versions) on a daily basis in their arctic lives, referring to it as the “Svalbard bible” (or Spitsbergen bible, whatever you prefer)! A compliment that I as the author am happy to accept.

The English version Spitsbergen-Svalbard has been updated thoroughly in early 2018, and the same goes for the Norwegian version Svalbard – Norge nærmest Nordpolen which came out in 2017.

All three versions of the guidebook can be ordered on this website including the German version. If you order the German version, you will get the new, 6th edition as soon as it is available (expected in September 2018).