Home → * News and Stories → Walrus population is growing in Spitsbergen

Walrus population is growing in Spitsbergen

Good news about arctic wildlife populations – do they exist? There is, of course and for good (or, rather, bad) reason, a lot of attention on climate change and how polar bears and other species will cope with life in a world with less and less ice.

But then there are also walrusses (click here for some general information about these lovely animals). Several colonies in the Spitsbergen area (Svalbard) are monitored with automatic kameras to follow the numbers of animals coming and going. Results so far indicate a growing population and the pleasant observation that walrusses are not bothered by tourists. It is rather the occasional polar bear who is seriously disturbing resting walrusses – these ruthless polar bears just don’t keep the minimum distances. 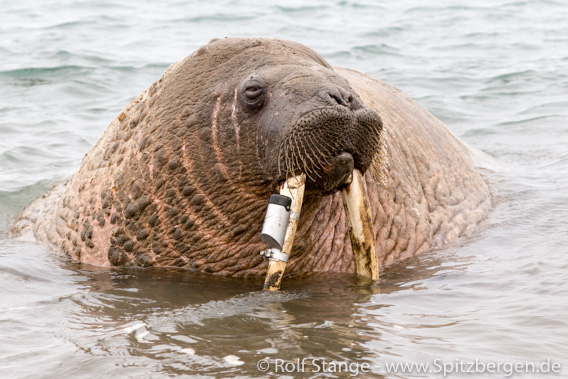 Additionally, some walrus are equipped with satellite senders to follow migration patterns. This is important to establish which percentage of the total population in an area is resting on shore while the others are in the water. Data show that about 25 % of the walrusses are resting on show while the majority of 75 % is swimming.

This knowledge makes the number of walrus seen at the colony sites on shore a good indication for the total regional population. Censuses are made roughly every 5 years with small planes equipped for the purpose. They follow the coastline in an altitude of 1000 feet (a good 300 m) while taking photos. Previous counts were made in 2006 and 2012 and the most recent one followed in August 2018. All colonies are surveyed in a time frame as short as possible to make sure individuals are not counted twice ase they may make visits to friends and colleagues at other resting places.

86 colonies were surveyed in Svalbard in August 2018. The number of walrus observed varied from 0 in many cases to a maximum of 269. 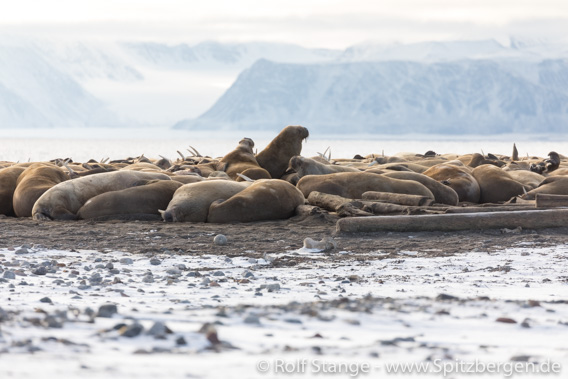 And what is the result? The number of walrusses present in the whole of Svalbard in August 2018 was estimated between 5031 and 6036 individuals. Nailed down to one figure, the population size is 5503 animals, as was reported noy by Christian Lydersen, Magnus Andersen, Jade Vacquie Garcia, Samuel Llobet and Kit Kovacs (Norwegian Polar Institute) in an article in Svalbardposten. This is 42 % more than counted the last time in 2012. A very positive development! But no surprise if you consider that walrusses were hunted almost to regional extinction until protection finally came in 1952. The current growth of the population is still a reaction to the end of hunting, just as with the polar bear population in the same area. 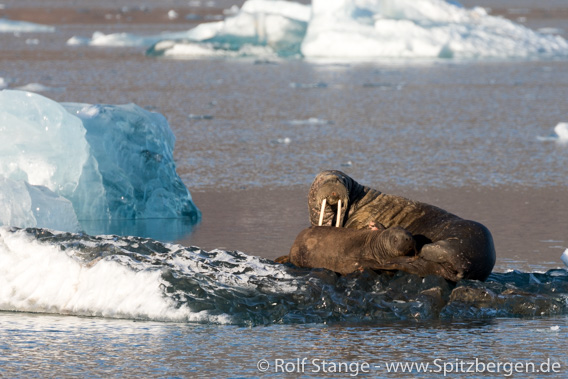 Walrus cow with calf: beautiful symbol for a growing population.

It will, however, take many more decades before the population will be even remotely near original levels, if this ever happens again.