Lunckefjellet: the end of an arctic coal mine

The Lunckefjellet coal mine is a political-economical phenomenon. The first ton of coal was “produced” in November 2013 – a symbolic act, the mine was not yet in productive operation. This was not the case either when Lunckefjellet was officially opened on 25 February 2014, but the mine was “ready to go”. Many thought production would start now big-time, as the mine had until then cost more than 1 billion Norwegian crowns (more than 100 million Euro) and it was there and ready to start production. 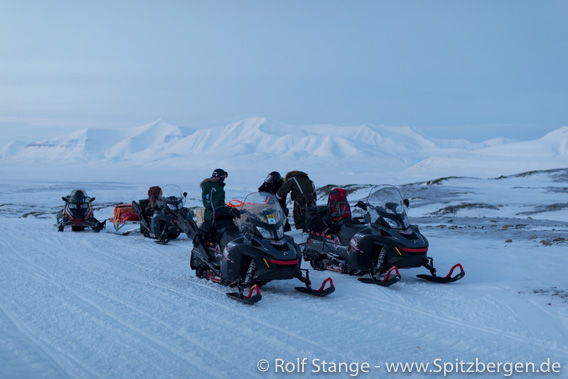 Scientists on the way to the Lunckefjellet coal mine.

But this was not to happen. The coal prices on the world markets dropped and the mines of Sveagruva, the Norwegian mining settlement in Van Mijenfjord, went into standby operation just to make sure they would not become inaccessible and mining could start one day – if this decisions was made. 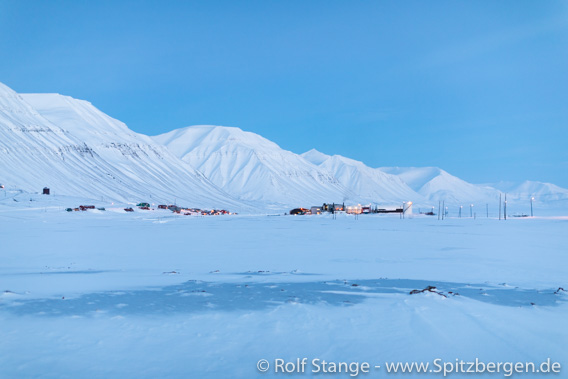 In the fall of 2017, the Norwegian government put their foot down. Being the 100 % owner of the Store Norske Spitsbergen Kulkompani (SNSK), the company that owns and runs all Norwegian coal mines in Spitsbergen, the government could directly decide about the fate of mining and miners in Sveagruva and Longyearbyen and related economies. The decision in 2017 was to put an end to all mining in Sveagruva. Both the coal mine Svea Nord, which had been profitable for a number of years, and the new mine in Lunckefjellet were to be phased out and physically cleaned up as far as possible. And the same was to happen for the settlement Sveagruva itself. Norwegian coal mining in Spitsbergen is only continued now in mine 7 near Longyearbyen (where the operation has since increase from one shift to two shifts). 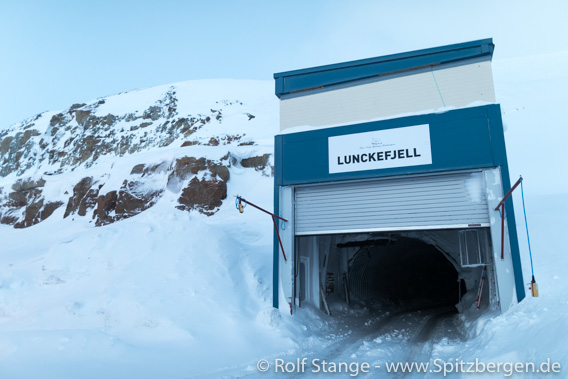 Day facilities and mine entrance at Lunckefjellet.

The reasons were officially said to be entirely economical considerations. The government does not really give more information than necessary, relevant documents have been declared confidential. Many see the end of coal mining in Sveagruva, especially in the newly built Lunckefjellet mine, with a tear in their eyes, as tradition, jobs and an industry that is important for Longyearbyen are about to get lost.

The end of coal mining in Spitsbergen does not come as a total surprise, everybody knew it would come one not too far day. Other branches are developed, with science, education and tourism high up on the list. Nevertheless, Longyearbyen would not exist without coal mining and mining has been the main activity here for most of the history so far. Many people have an emotional connection to mining and quite a few still have a real one, directly or indirectly, and losing coal mining will hurt them economically.

The government was not interested in discussing offers from investors to continue mining in Lunckefjellet, which was never intended to last for more than maybe 7-8 years anyway. This does not add to the credibility of the official reasoning for closing of the Lunckefjellet mine being solely based on the difficult economy. 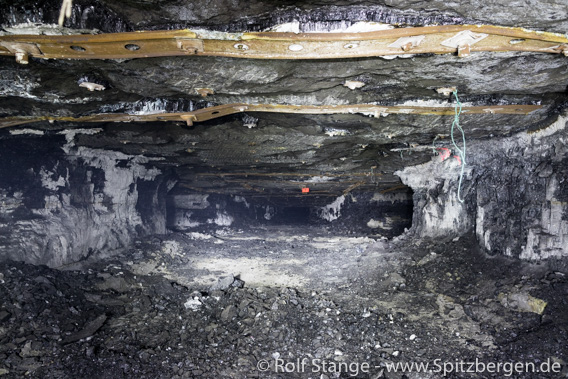 Tunnel of the coal mine in Lunckefjellet.

The coal mine in Lunckefjellet will be closed soon. The ventilation system is currently being dismantled, and once that is not operative anymore, only specialists with self-contained breathing apparatus could, theoretically, still enter the mine – for a short period, until the roof has become mechanically unstable. This will not take a lot of time. The Lunckefjellet mine will soon be as difficult to reach as the far side of the moon. 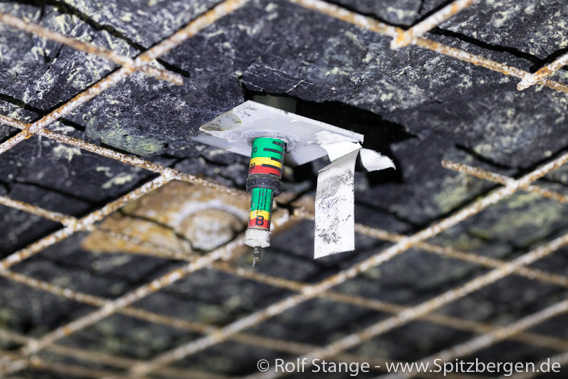 Device to monitor rock movements in the roof of the mine. 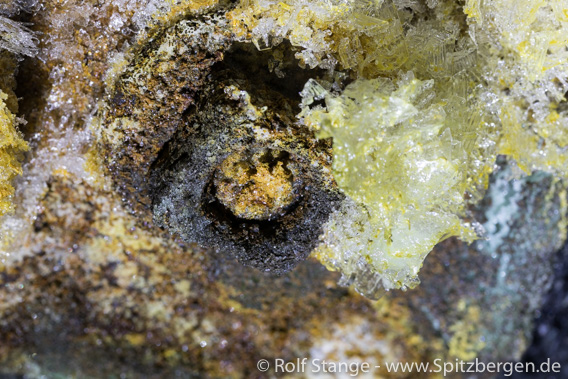 Bolts to secure the roof are exposed to permanent erosion and mechanical stress. If they are not regularly controlled and serviced a coal mine soon becomes a very dangerous place.

Last week (5-7 February 2019), geologists from the mining company Store Norske and UNIS took literally the last chance to take samples from the coal seam in Lunckefjellet. The coal geology in Spitsbergen is less well known than one might assume and than geologists would want it to by: nobody really knows what the landscape exactly looked like where the bogs grew that later formed the coal. 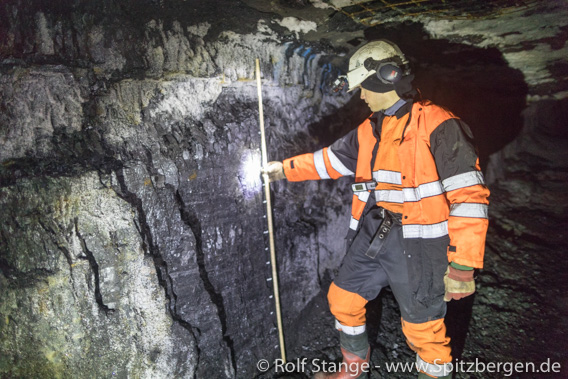 Of course there were bogs, and saltwater from a nearby coast is likely to have been an important factor, at least at certain times. But which role did sweetwater play, lakes and rivers? Why are there sandstone and conglomerate (gravel-bearing sandstone) layers and channel fillings within and just on the edge of the coal seam? What did the sea level do at the nearby coast, what was the influence of tectonics? Were there hills or even mountains in the area, or was the surrounding relief more or less level? 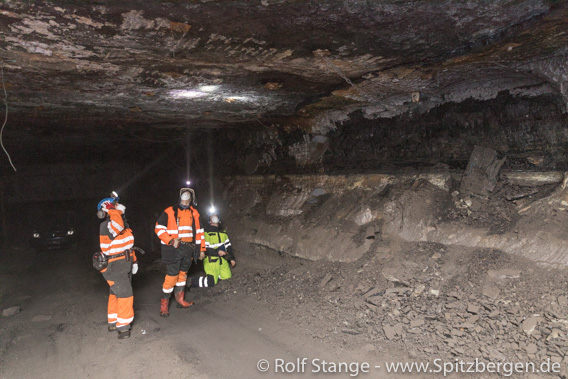 Geologists Malte Jochmann, Maria Jensen and Christopher Marshall at work in the Lunckefjellet mine, inspecting outcrops and potential sampling sites.

A walk through the tunnels of the Lunckefjellet mine produces fascinating views into the geological history, raising questions and answering some of them. The geologists Malte Jochmann (SNSK/UNIS), Maria Jensen (UNIS) and Christopher Marshall (University of Nottingham) had just two days to document outcrops and to take samples which might answer some of these questions in further, detailed investigations involving advanced laboratory methods. 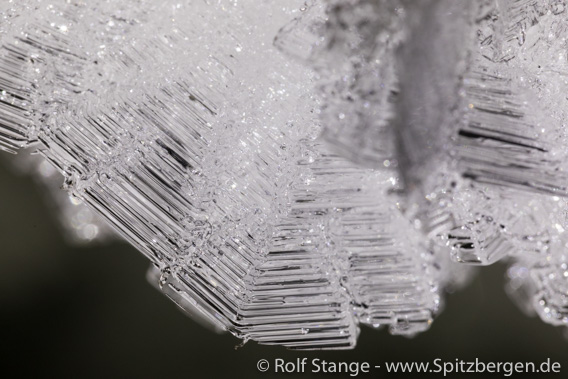 Even inside a mountain you are constantly reminded that you are in the Arctic: the temperature is constantly below zero, and ice crystals are growing on black coal surfaces.

Now the Lunckefjellet mine is about to be closed forever. A lot of equipment has already been removed, soon the mine can not be entered anymore. Also Sveagruva will be subject to a major clean-up, initial work has already begun. There won’t be much left in the end. Some artefacts which are considered having historical value will remain (everything older than 1946 is generally protected in Spitsbergen, the threshold will probably be moved up to 1949 in Sveagruva) and possibly a very few buildings for future use – research? Limited tourism? Nobody knows.

It will not be mining, that is for sure. 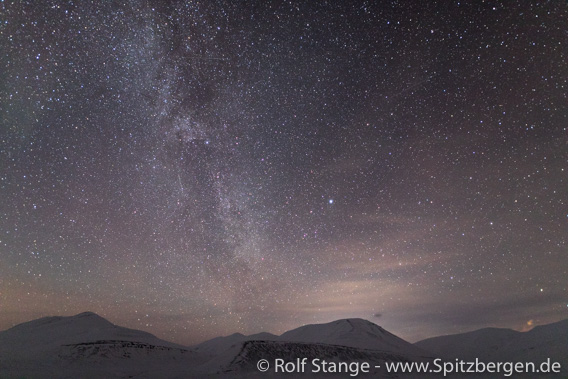 Sky of stars on the way back from Sveagruva to Longyearbyen.