Spitsbergen’s largest mining disaster ever took place exactly 100 years ago, 03 January 1920, in mine 1 in Longyear City. The mine is today mostly known as the “American mine” and Longyear City is called Longyearbyen since 1926. Mine 1 was in operation from 1906, when Longyear City was founded by the American Arctic Coal Company, founded and owned by John Munro Longyear. In 1916, Longyear sold his property to the Norwegian company Store Norske Spitsbergen Kulkompani, known as Store Norske, short SNSK. Store Norske continued to produce coal in mine 1 (later called mine 1a, as there was a mine 1b in operation from 1939 above Sverdrupbyen, the southernmost part of Longyearbyen). 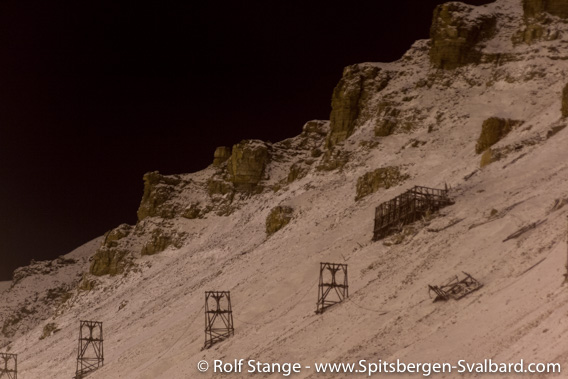 Mine 1, known as “American mine”, above the church in Longyearbyen.
26 miners died here during a coal dust explosion in 1920.

Mine 1 exploded in the early morning hours of 03 January 1920. It was a coal dust explosion that killed 26 miners. There were only eight survivors, two of them injured. Blasting is supposed to have ignited the coal dust. The explosion was so strong that a pit pony is said to have been blown out of the mine and across the valley!

This accident was a catastrophe for the small mining settlement Longyear City/Longyearbyen, which was back then completely isolated during the polar night. Darkness and bad weather made rescue operations difficult. Mine 1 was closed after the accident.

With 26 victims, this accident remains the largest catastrophe related to mining ever in Spitsbergen (the explosion in the Esther mine in Ny-Ålesund on 05 November 1962 killed 21 miners). 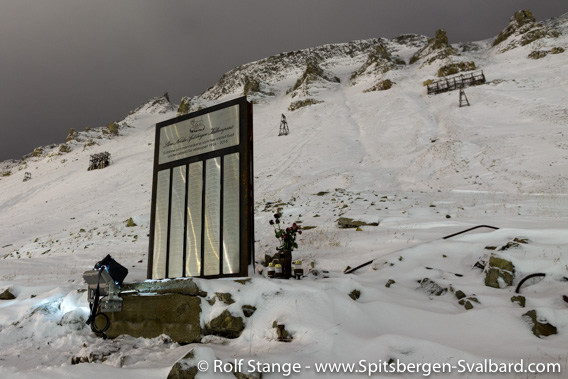 Memorial for those miners who died during their work for Store Norske from 1916.
Mine 1 is visible in the upper right corner.

A memorial was erected in 2016 near the road below mine 1. It is dedicated to those miners who died during their work for Store Norske Spitsbergen Kulkompani since the company bought Longyear City in 1916. Today, 100 years after the accident of 03 January 1916, a ceremony will be held here to commemorate those who died in Spitsbergen’s largest mining accident.