A polar bear track has been found on Longyearbreen (-glacier) close to Longyearbyen, according to the local newspaper Svalbardposten. It is very unlikely that the track is from the bear that has kept people in Longyearbyen excited in late December and was then shot on 01 January: meanwhile, there have been windy weather and snowfall, so the recently discovered tracks are very likely younger. This means that there was again a polar bear close to Longyearbyen and it might still be around.

Common sense and the Sysselmannen tell everybody in and near Longyearbyen to be alert and take care. 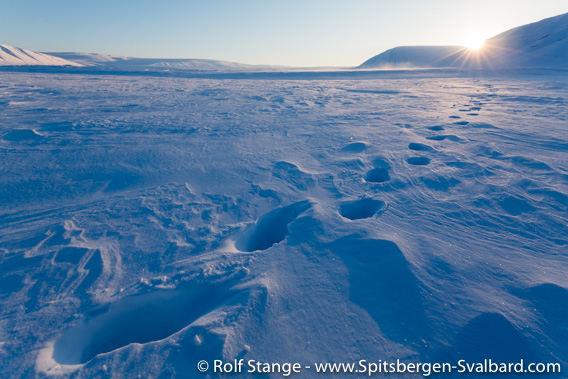 As expected, the discussion around the bear that was shot in the early morning hours of New Year’s Day in Hanaskogdalen, about 10 kilometres away from Longyearbyen, is highly controversial. Norwegian officials confirm that they had to shoot the bear in order to guarantee the safety of the people in Longyearbyen especially during the dark season as this animal was not shy anymore and did not hesitate to go near and even enter the settlement. Others, such as the Russian polar bear scientist Nikita Ovsyanikov who has gathered a lot of experience with polar bears in the Russian Arctic, even speak of “murder” and accuse the Syssselmannen of not having used all options to scare the bear away permanently. Here, Ovsyanikov mentions pepper spray which is not a common polar bear deterrent in Norwegian territories, it is actually not even legal accessible for mere mortals under Norwegian legislation. An interesting discussion and it would certainly be interesting to investigate further non-lethal techniques to scare polar bears away from settlements, a field where a lot might be learnt from people like Ovsyanikov. Pepper spray might certainly expand the range of options of Norwegian police when it comes to non-lethal polar bear deterrents and there are those who say that it might also have a place in a wide context. Private persons might use it, for example, from the relative safety of a hut or even a tent, something that would, however, require knowledge and nerves that not everybody has.

To make it clear again: pepper spray is currently not legal in Norway including Spitsbergen and this is unlikely to change at any time soon.