Yet again, a polar bear has been in the area near Longyearbyen. This time, it was not just tracks in the snow, but a very close encounter of a group of 4 dog sledges with guides and tourists in Bolterdalen. The group was returning from Scott Turnerbreen, a glacier that is a popular destination for (half) day trips by dog sledge, to the dogyard of Green Dog in Bolterdalen close to Adventdalen. Suddenly the bear was standing on a terrace next to the route, much to everybodies surprise, probably including the bear. The bear came and sniffed on the dogs of the first sledge, while the tourists on the sledge – a woman and her 11 year old daughter – were watching. The guide, Marcel Starinsky from Slovakia, realised that he did not even have time to get is rifle ready. Instead, he grabbed a piece of rope and gave the bear a slab on the nose. Then, the bear went a bit away, passed the other sledges and disappeared in the darkness. The whole event took probably less than a minute, as the guides told Svalbardposten later.

The group then returned to the dogyard and guides and tourists took their time together to digest this very unusual experience. As far as known, everybody had his or her nerves under control during the event and according to Marcel Starinsky and his colleague, Daniel Stilling Germer from Denmark, the bear did not show any signs of aggression. It would be interesting to hear the story from the woman and her daugher on the first sledge. They have certainly got a story to tell now. 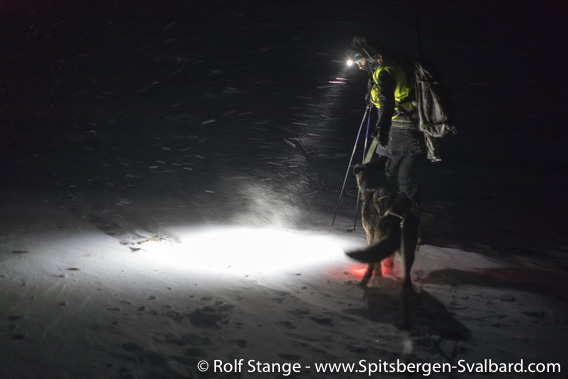 Out on tour in darkness and snow.
It can be virtually impossible to see what is going on nearby.

Later, the polar bear was again seen near the dogyard, but was then driven away by the Sysselmannen’s helicopter through Bolterdalen and towards Reindalen.

It is hard to say if this bear had anything to do with the tracks that were recently seen on Longyearbreen. These tracks were followed by the Sysselmannen the west, up to Kapp Laila in Colesbukta, whereas the bear in the event narrated here is assumed to have come from Adventdalen, from the east. This at least suggests that it is not one and the same animal.