The polar bear that died in late January during transportation in a helicopter weighed only 62 kg as first results of the post mortem revealed. This means that the bear must either have been very small or extremely thin. Even a small, sub-adult female should have more than 100 kg. Even a second year cub should weigh significantly more than 60 kg, and it should still be with its mother then. A first year cub would not be able to survive on its own, without the mother.

Also chances for survival for a (sub)adult polar bear with a weight of only 62 kg would have been doubtful at best.

This is currently, however, speculation. Further details of the post mortem, which will hopefully enable specialists to draw conclusions regarding the cause of death, will only be available in several weeks. 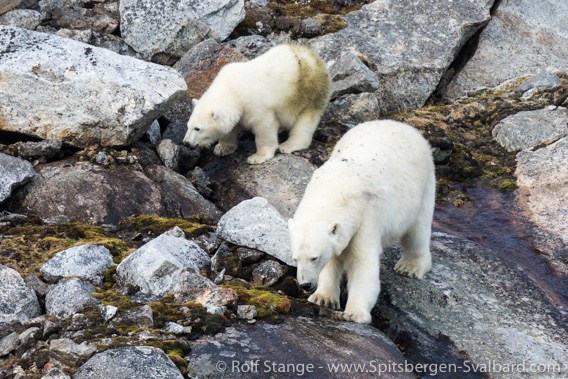 Young polar bear together with its mother. The little bear was about 20 months old at the time the picture was taken and its weight was certainly well above 60 kg.

There is also new information regarding the polar bear visits to Longyearbyen in late December: DNA analysis of various samples revealed that it were at least two individuals who came close to and into the settlement then.