After a lucky return from Antarctica, the only continent currently not directly affected by the Corona-virus (but certainly indirectly), I am now about to catch up with the Spitsbergen news on ths site. It is not that nothing has happened up north. To start where I stopped a few weeks ago: the coal mine Svea Nord was indeed officially closed with a little ceremony on 04 March, putting an end to a good 100 years of mining history in Sveagruva.

I’ll get back to other issues over the next couple of days. Now, the one thing that keeps the world busy and in awe: the Corona-virus – what else? So far, the virus has not reached Spitsbergen. But it will not be possible to keep the settlements fully isolated from the rest of the world forever. The question is, as anywhere, how to controll this transition – if a controlled transition is possible at all.

So far, the idea is to keep all settlements as isolated as possible to protect the local population from the virus. Tourism has come to a complete stop. Everybody who is now travelling to Spitsbergen has to remain in 14 days of quarantine. Exceptions can only be made by the authorities under strict conditions if requested by the employer or an institution. Generally, only Norwegian citizens, residents or people with a work permit (does not apply in Svalbard, but you would need to have a good professional reason to travel up there right now) are allowed in. 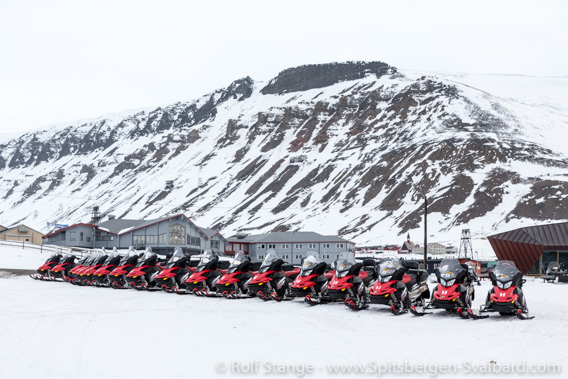 Snow mobiles in Longyearbyen: currently silenced by the Corona-virus.

This will clearly have a significant impact on the local economy: March and April are usually high season within tourism. Hotels and activities are usually fully booked. Currently, however, many companies and jobs in the service industry are at risk, and many guides have already left the island, waiting for better times in their home countries which are usually cheaper places to stay.

This is now in force until 13 April but may be extended. The future development remains to be seen, also with regards to the summer shipping season.