Marine biologists have for the first time made a complete census of Beluga whales in Spitsbergen to get a precise estimate of the population. The result was made available on Researchgate in February.

The scientists around the Norwegian marine biologist Christian Lydersen have made aerial surveys of the coastlines of almost all islands in Svalbard. Additionally, they have covered the open water areas of the large fjords on the west coast and individual transects out towards the open sea to get an overview as complete as possible. 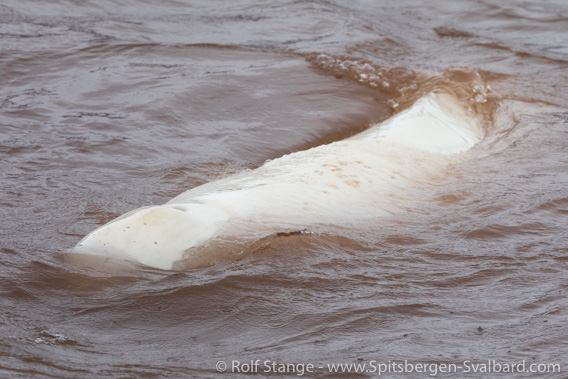 Beluga whale in Dicksonfjord. Large groups are very difficult to count. There is only one in the picture, but how many did we see within 5 km or so around it? Dozens? Hundreds?

The result is indeed surprising: 22 groups with a total of 265 animals were sighted. Statistical calculations result in a population estimate of 549 White whales for the whole Spitsbergen archipelago (95 % confidence interval: 436-723).

There are, of course, remaining uncertainties. More animals than estimated may have remained invisible during the survey. But even if you increase the result based on a higher estimate of unseen individuals, it remains surprisingly low. Until now, all there was was rough estimates based on observations which were more punctual in space and time. These may have been corrupted by the migrational behaviour of White whales, which often seem to circle around in certain areas for a while, giving an observer who remains in one place on the coast the impression that one group is moving through after the other.

It is also so far unknown if there is a connection to Beluga whales in Frans Josefs Land (Russian Arctic). If Spitsbergen and Frans Josefs Land share a population, as is the case with polar bears and walruses, then it would again be a completely different picture. But the few data that are available from tracking Beluga whales do not support this, but it can certainly too early to exclude this hypothesis.