Polar bear shot on Phippsøya in 2018: no report yet

The case of the polar bear that was shot in late July 2018 on the island of Phippsøya by a crew member of the German cruiseship Bremen attracted media and public attention around the world.

A team from the ship had gone ashore on Phippøya, which belongs to Sjuøyane in northernmost Svalbard, to check the site before passengers were scheduled to come ashore. The dramatic incident ended with one person receiving minor head injuries and the bear being shot. Passengers were not ashore during the incident. 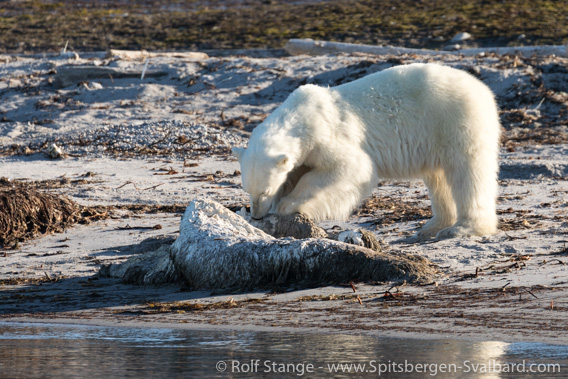 Polar bear on Phippsøya, a common landing site, in mid July 2018. It was very likely this bear that was shot in the same place in late July.

Almost two years have gone past now and one may wonder what came out of the whole thing. The disappointing intermediate result is that there is no result yet, as Svalbardposten was told on request by the Sysselmannen. The case was originally handled by the Sysselmannen and then it went to relevant authorities in mainland Norway for further legal treatment and from there in late 2019 back to the Sysselmannen. And there it still is today. The large capacities absorbed by the Corona crisis are said to have played a role in recent months.

So while we still have to wait for confirmed information, we can speculate a bit about some factors that may have contributed to the tragic outcome: It is certainly possible to not see a polar bear that is in the vicinity in the uneven terrain of that particular place on Phippsøya even if one is alert. There was a carcass on the beach at that time, and the bear had been returning to that carcass repeatedly over a longer period to feed on it. The carcass was lying in the area where landings are commonly made, but it was hard to see from the distance.

If one happens to go ashore close to the carcass, then it is certainly possible that a bear that is in the area, resting and waiting for the appetite to return, shows a rapid and aggressive reaction.

Again: this is speculation, based on local knowledge and experience, including a sighting of a polar bear in this given place in mid-July 2018, which was most likely that particular bear that was shot soon thereafter. Meanwhile, we can curiously await the report from the Norwegian authorities to learn more about what actually happened during the incident.