Norway about to open borders for tourists from most EU countries

The Norwegian Ministry of economics and fisheries has communicated that tourists from most EU-countries will be allowed to travel to Norway again from 15 July. Today (10 July) the Norwegian institute for public health (Folkehelseinstitutt) has published a map which shows the various European countries in green or red, respectively. Tourists from “green countries” will be allowed to enter Norway from 15 July without special reason or permission. Citizens from Scandinavian countries except Sweden were already allowed into the country from 15 June. 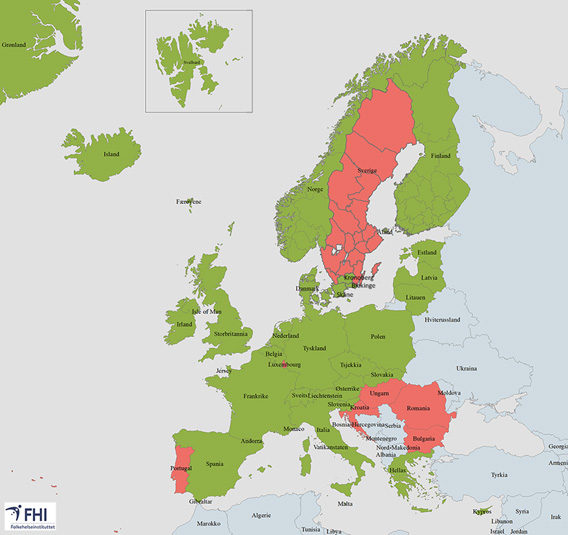 Map of the Norwegian institute for pubblic health (Folkehelseinstitutt) as of 10th July.

This map is, however, to be updated at intervals of 14 days or at any time earlier if needed. Tourists from countries with higher or unclear infection rates may be faced with travel restrictions such as quarantine.

Not all EU-countries have made it onto the “green list”: Portugal, Luxembourg, several countries in southeast Europe and most parts of Sweden are bright red on the map. The example of Sweden shows that the Norwegian government may take decisions on a regional level: tourists from several provinces in south Sweden (Blekinge, Kronoberg and Skåne) may also travel to Norway without restrictions from 15 July, in contrast to the rest of the country.

Tourists from countries outside Europe are currently generally not allowed into Norway unless they have close relatives or a partner in the country, according to the Norwegian government.