Home → * News and Stories → Water ingress in mine 7

Water ingress in mine 7

It was probably the extremely warm weather of the last weekend that now gives the mining company Store Norske Spitsbergen Kulkompani (SNSK) troubles with water in mine 7, the last Norwegian coal mine still in operation in Spitsbergen.

Water ingressions are not unusual in Spitsbergen’s coal mines, many of which are partly situated under glaciers. Mine 7 is close to the small ice cap Foxfonna which “provides” meltwater to the mine during the melting season, so pumps are routinely in operation. But the latest ingression went far beyond the capacities of the available pumps. 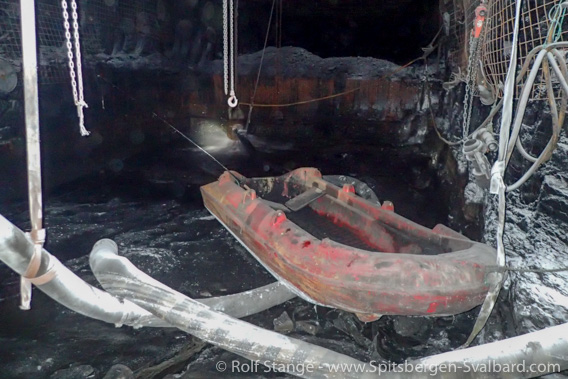 Water ingressions are not uncommon in the coal mines in Spitsbergen. Here, a boat is even kept available to move around in flooded areas (the photo is from the mine Svea Nord).

Mine 7 is currently anyway on plant holiday. The water ingress was discovered during a routine control on Sunday morning. Equipment and personell from Sveagruva and mainland Norway are now supposed to deal with the situation and return the mine back into productive condition. Coal production is scheduled to start up again, but this is likely to be delayed.