It is hardly surprising: the tourism industry in Spitsbergen has largely collapsed and there is hardly any light on the horizon, as recent infection rates give the Norwegian government reason to put travel restrictions on tourists from more and more European countries. According to available tax statistics analyzed by Svalbardposten, 51 Longyearbyen companies have altogether lost a sales volume of 170 million Norwegian kroner (about 17 million Euro or 19 million US-$) during the months from April to May, compared to the same period in 2019 – and this does not even include some major players such as Hurtigruten Svalbard, the biggest supplier of tourism-related services in Longyearbyen. The real numbers will, thus, be much higher and certainly devastating. During the same period, local companies have received 16 million kroner as public support, less than 10 percent of the turnover loss. 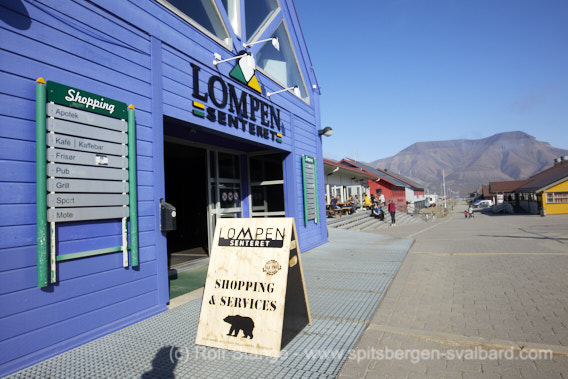 Shopping in Lompensenter in Longyearbyen: not much fun without tourists.

And the numbers of tourists keep dropping, although there have obviously never been many this year. Last week, the hotels in Longyearbyen had just 178 overnight guests per night in average. Officially, Longyearbyen has lost 96 inhabitants since the beginning of the corona crisis – and again, real life is much worse as the statistics are anything but complete. They do, for example, not include the large number of seasonal workers who come during the tourist season. This year, many of these have lost their jobs early in the crisis, while others did not come at all.

At the same time, the Norwegian government introduces travel restrictions for tourists from even more European countries. “Red” countries currently have too high infection rates, while data for those shown with hachure is incomplete or deemed unreliable by the Norwegian authorities. In either case, tourists from these countries will have to stay in 10 days quarantine upon entering Norway. The map shown here, published by the Norwegian health authority (Folkehelseinstitutt), will be in force from 22 August. 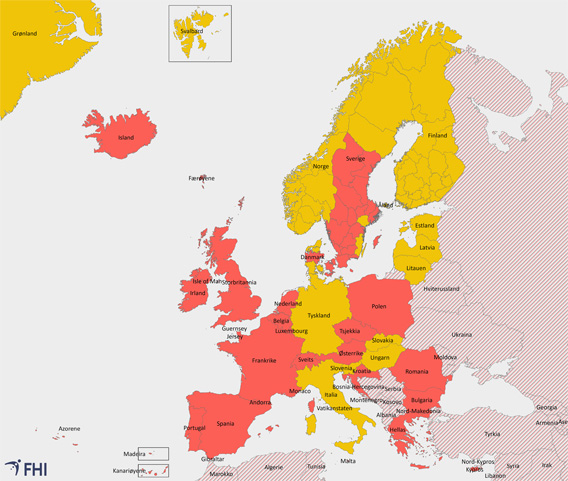 Norwegian Corona-map published on 19 August 2020 (in force from 22 August).
© Folkehelseinstituttet.

So far, no cases of corona infections or Covid-19 disease are known from Svalbard’s settlements.