Again, Longyearbyen had polar bear visitors, and not just once: a polar bear that had tried to break into several huts in Hiorthhamn, on the north side of Adventfjord just 2.5 km away from Longyearbyen, was scared away by the police (Sysselmannen) with flare gun shots. 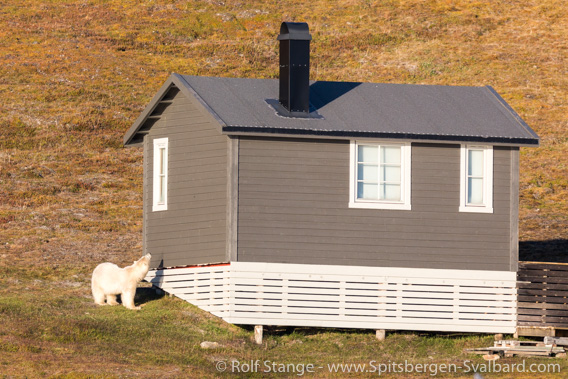 Not much later, a female bear and a cub came to the same area. In this case, the authorities decided quickly to anaesthetise the bears and to fly them away with a helicopter. A similar operation earlier this year had had a fatal outcome for the bear, an event that later attracted substantial criticism in the public but also from relevant Norwegian authorities. As a consequence, the routines were improved this time: Jon Aars, leading polar bear scientist of the Norwegian Polar Institute (NP), was personally present, together with a vet – a new procedure for the NP. A different drug was used and the bears were given additional oxygen during the flight and an antidote upon arrival to give them an accelerated wake-up, a process that was also supervised this time, as Aars told Svalbardposten.

As the two bears were known to be resident in Isfjord, there were flown to the northwest part of this fjord, rather than to a remoter area such as Nordaustland or Edgeøya, as is common in such cases.

The bears were said to be well. The mother is 15 years old and relatively thin, something that is not unusual considering her age and the season. Nevertheless, she weighed several 100 kg. Most likely, they had recently found something to feed on. The cub weighs 49 kg and is said to be in good condition.