As reported recently, a polar bear family has been seen not far from Longyearbyen in Adventdalen. The Sysselmannen tried on Saturday to move them away by scaring them with helicopter and snow mobiles. They followed the polar bears to upper Adventdalen and left them there, as they appeared to be moving “into the right direction”.

But they seem to like themselves in the vicinity of Longyearbyen and now they are back. They have recently settled down to rest in Adventdalen not far from Mine 7, where they are now under observation by the authorities who are keen on keeping control The Sysselmannen is asking the public to stay away from the area to prevent unnecessary stress for the animals. 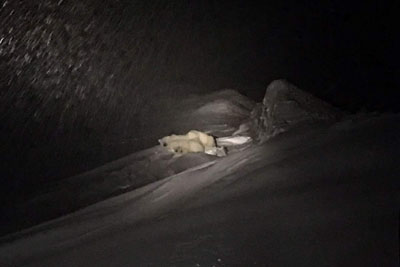