In late April 2017, a serious accident happened in Tempelfjord when a group of snow mobile tourists broke through thin ice. Altogether 7 persons suffered injuries, 6 of them were in the water. 4 of these spent up to 48 minutes in the ice-cold water. One of them died some days later in the hospital in Tromsø.

Some years ago, the Trust started to develop tourism in Barentsburg to add new economical activities to coal mining, which will obviously not last forever.

In connection to the Tempelfjord accident in 2017, the Arctic Travel Company Grumant and hence the Trust Arktikugol are accused of not having established sufficient safety routines for travelling on sea ice including fjord ice. No ice thickness measurements or other means of establishing sufficient safety margins were taken before the group went out on the ice on the fatal trip in 2017.

Due to the fatal outcome of the accident, which caused 7 persons to end up in ice water and one of them to die later, the state advocate Troms (north Norway) has now imposed a fine of NOK 150,000 (currently ca. Euro 15,300 or US-$ 17,700). The Trust Arktikugol has accepted the fine. 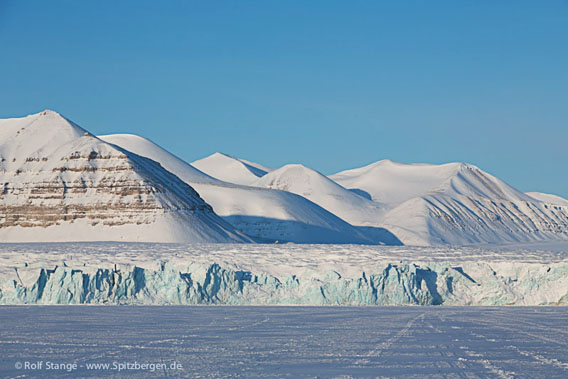 Glacierfront of Tunabreen in Tempelfjord: a popular day trip, but the ice can be dangerous.

The glacier front of Tunabreen in Tempelfjord is the highlight of a popular day trip in the late winter, but the fjord ice is not as reliable anymore as it used to be and the classical route does not always work anymore. In 2018, the ice conditions were good in Tempelfjord, but in the main season the fjord ice was closed by the Sysselmannen for motorised traffic to avoid disturbance of seals and polar bears who were often seen in that area then.