Home → * News and Stories → Corona crisis: many lost their jobs in Longyearbyen

Corona crisis: many lost their jobs in Longyearbyen

The Corona virus hits economies hard everywhere in the world. Longyearbyen is no exception and the current crisis gives rise to a phenomenon that has so far been almost unknown up there: unemployment. Tourism and the service industry have largely collapsed and several hundred people have lost their jobs. According to official statistics, there were 9 people without jobs in Longyearbyen on 10 March, but already 261 on 23 March – the strongest increase in all of Norway, and the curve is still going up steeply. The actual number is supposed to be higher, because citizens of countries outside the European Economic Area (EEA) can not register as unemployed in Norway.

The fact that unemploymentship has been virtually unknown in Longyearben is not only due to the good economical situation. Actually, recent years have seen the collapse of large parts of the coal mining industry and a lot of jobs were lost in this process. On the other hand, tourism and science have developed positively. But the background is another one, which has to do with the Spitsbergen Treaty which recently became 100 years old: the treaty gives citizens from signatory countries the same individual rights as Norwegians. Everybody can live and work in Longyearbyen without asking for permission.

But this freedom has a price tag: there is no social system that takes care of everybody. Essentially, everybody is responsible to take care of him- or herself. If you can’t finance you life in Spitsbergen, then you have to leave. Five persons have been expelled by the authorities since 2017 because they were not able to support themselves financially. Four out of these five were expelled before 2020, so there is no connection to the recent crisis.

In other words: if you can’t afford to live in Longyearbyen then you are not going to stay long, so there has not been unemployment on any significant level until recently. If you needed public support, then you had to rely on the social systems of your home country, many of which may not support citizens living abroad or only to a degree that will not make much of a difference as Longyearbyen is a very expensive place.

This is, in principle, not going to change: Norway is generally neither obliged nor willing to take responsibility for citizens of third countries who are getting in difficulties in Longyearbyen. On the other hand, the current situation is acute. Longyearbyen has a very international population. There is, for example, a significant number of people from Thailand who came to Longyearbyen years ago to live and work there. Many have typically jobs in restaurants or other service industries that have now collapsed. Many can hardly expect much support from their original home countries, and returning there may also not be an option easily available to everyone as many have given up there homes there years ago, plus the impossibility to travel anywhere these days. 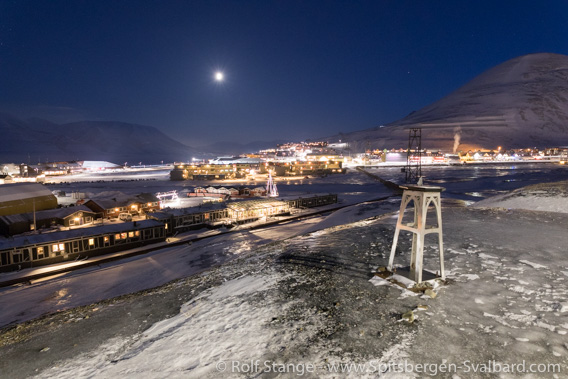 Longyearbyen during the Corona-crisis: dark times, even though it does not get dark anymore in reality and the sun will soon shine 24 hours a day.

So there are many people now in Longyearbyen who don’t have an income. There are estimates of near 300 people. Measures are taken now in Longyearbyen (Lokalstyre) to offer public help to citizens from third countries outside the European Economic Area. These measures come with a time limited, but there is clearly need for action right now. In the future, companies in Longyearbyen may have to install social insurance systems for their non-Norwegian employees, but right now the present situation needs to be dealt with. There have already been private aid appeals for families in difficulties, especially for people who moved to Longyearbyen less than 6 months ago because they are supported only for 20 days in the current Corona crisis package by the Norwegian government. Those who have been in Longyearbyen more than half a year will be supported until 20 June.

Longyearbyen Lokalstyre (community council) has applied for 178.5 million kroner from the Government in Oslo to support the local economy. This may include goods and orders that can be delivered quickly by local companies, financial relief for inhabitants by cutting fees for example for water, power and long-distance heating, all of which is very expensive in Longyearbyen and to compensate for losses expected in the economy of the community. Just the cancellations by large cruise ships for this year will probably cost more than 20 million kroner in harbour fees that will be lost.

Just as anywhere in the world, nobody in Longyearbyen has got an idea when and how the situation will normalise again.