The Corona virus has not yet come to Spitsbergen (as far as known at the time of writing). The strict quarantine rules are still in force, they have actually been extended on Friday (17 April) and will now last at least until 01 May, as the Sysselmannen informed.

As for economies all over the world, Longyearbyen is suffering severely from the economical consequences. Many companies and people depend on incomes derived within tourism. Unemployment has risen sharply to levels previously unknown at 78 degrees north.

Everybody has regular expenses and is under pressure to cover them, but some have even higher regular costs and this includes companies with polar dogs. Dogs need food and care even when there are now tourists. Current economical aid by the Norwegian government is amongst others aiming at helping companies with their expenses until May. But the current winter season is now coming to an end, and economically, the 2020 season just never happened, and the next winter season will not come any earlier than early 2021 – if it comes, that is. Companies have said that they will be happy if 2021 brings 60 % of a normal annual income. 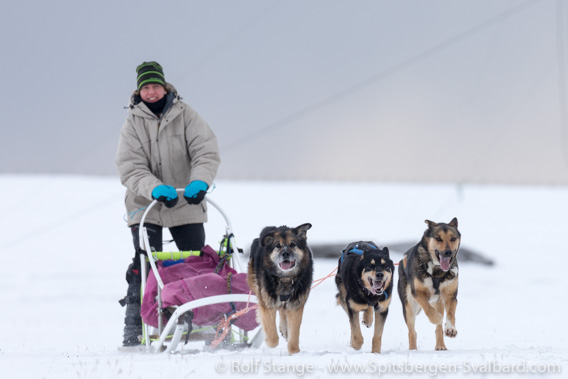 Out on tour with dogs near Longyearbyen. Makes seriously happy!
And so does food for the dogs after the tour.

Some of the smaller companies have already appealed for help: Svalbard Husky have an appeal on their website, and Svalbard Villmarksenter have made an appeal in a local social media group, calling for “donations ear-marked dog-food”. Both are local family companies.

If you want to be a sponsor or godparent to a polar dog in Longyearbyen, then you are welcome to get in touch directly with either Svalbards Husky through their webseite (click here), via email (post@svalbardhusky.no) or give them a call: +47 784 03 078.

Or get in touch with Svalbard Villmarksenter through the webseite (click here), via email (info@svalbardvillmarkssenter.no) or on the phone: +47 79 02 17 00.

Martin Munck of Green Dog Svalbard, a larger company with 275 dogs, calculates 100,000 kroner per month just for dog food (currently near 8900 Euro). In a conversation with Svalbardposten, he strongly rejects rumours that killing dogs could be an option.