Public grants for travel costs instead of living expenses; tourism starting up again

Unemployment has gone through the roof in Longyearbyen during the Corona pandemic and many have come into financial troubles. Only Norwegian citizens are eligible for support from the Norwegian public welfare system because of the conditions of the Spitsbergen Treaty. Others have to take care of themselves or they have to ask for support in their home countries.

Nevertheless, the Norwegian government had stepped in and offered public help for citizens of third countries in Longyearbyen to prevent a social crisis. This programme will, however, cease on 20 June and the government in Oslo does not consider to extend it, despite such demands being raised in the discussion in Longyearbyen. Instead, the government wants to offer financial help with travel expenses to those who want to leave and return to their home countries, according to a press release by minister of justice Monica Mæland.. 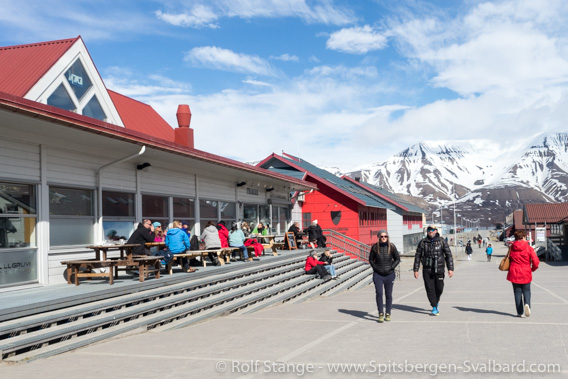 Tourists and locals enjoying the sunshine in Longyearbyen:
this is what everybody is hoping for from 01 June.

Politicians, companies and many individuals in Longyearbyen hope that not many will have to make use of this offer from the government. Tourists from mainland Norway can come to Spitsbergen again from 01 June and bookings have started to come in. Some tour operators have told Svalbardposten that they are currently happy with the development of bookings. Still, the majority of employees are at home without work, and some have already left Longyearbyen. But for many who come from countries further away such as Thailand, getting to their home countries would be very difficult because of current travel restrictions.

In the end, it will of course be the development of the Corona pandemic that will control the development: so far, there is no case of Corona confirmed in Longyearbyen. Nobody can tell how long this will last and what will happen then.