The wreck of the Northguider is now completely removed from Hinlopen Strait.

The shrimp trawler ran ground in Hinlopen, very close to the coast of Nordaustland, in late December 2018. The crew could be rescued by helicopter in a dramatic operation in very cold and stormy conditions and complete darkness. Later, environmentally dangerous materials including fuels and lubrication oils, paints, electrical equipment and fishing gear could be removed. 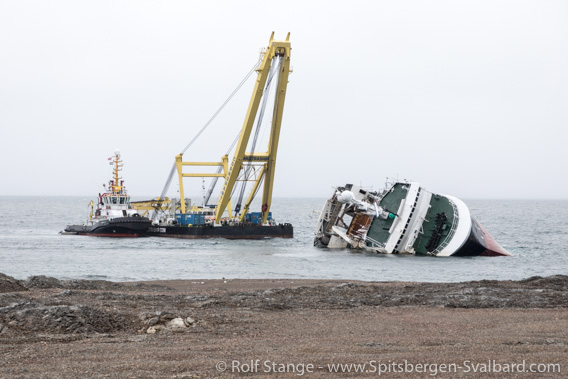 The wreck of the ship trawler Northguider and salvage vessels
in August 2019 in Hinlopen.

It was planned to remove the wreck during the summer of 2019, but difficult ice conditions delayed the operation and then it turned out that the wreck could not be removed in one piece because it was too heavily damaged.

Now the Northguider has been cut into several smaller pieces which could be taken to Norway. Divers confirmed that no wreckage is left on the sea flour either, according to the Sysselmannen.