First of all: happy new year!

Many of Spitsbergen’s glaciers have “always” had a lot of crevases, while others are considered good traffic ways for those moving around in the arctic wilderness. This is – was? – the case especially for many of Spitsbergen’s smaller glaciers that terminate with a gentle slope on land, rather than with a calving front at sea level. The smaller ones, ending on land, usually move more slowly, which creates less stress in the ice and hence fewer crevasses.

This has appearently changed for at least a number of glaciers, as the Sysselmannen established during a helicopter inspection of frequently travelled glaciers in Nordenskiöld Land in October 2020. It turned out that some of these glaciers had significantly more crevasses than they used to have in the past. Many of Spitsbergen’s glacier have been thought to have few crevasses only, which made them comparatively easy touring terrain …

Another factor relevant for safety on glaciers is snow, which can build up snow bridges over crevasses. Such bridges are fine when they are strong and safe, but they can be very dangerous traps if they are too thin to be strong enough, but thick enough to hide the crevasse. The summer of 2020 was at times extremely warm and has melted a lot of snow also on the higher parts of the glaciers. Snow bridges have build up again from zero.

Everybody who is out in the field in arctic terrain, be it with snow mobile, hiking, skiing, dog sledge, … should be careful and take adequate safety measures, especially in glaciated terrain. That has always been true and now this seems to be more relevant than before at least on some of Spitsbergen’s frequently travelled glaciers, and most likely also on other ones. In the press release, the Sysselmannen made it very clear that anyone who is on tour is him-/herself responsible for his/her own safety. Just in case anyone needed a reminder. 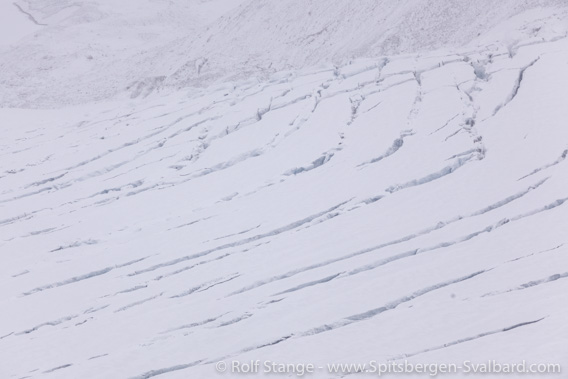 … but this has changed for at least some of them. Crevasses like the ones seen here are life dangerous, especially when they are hidden under snow.

The Sysselmannen has published a pdf with photos and maps that show some of the glaciers and crevasse fields in question.

The reasons are not yet scientifically established. It would be natural to assume that the velocity of shrinking glaciers is decreasing rather than the opposite. For a bit of speculation, it may appear reasonable to think that the extra meltwater supply during the warm summer of 2020 has decreased the internal friction of the glaciers, which may lead to greater speed and thus greater mechanical stress, hence more crevasses.