Hurtigruten and Ponant are operating the first cruises in Spitsbergen

This year’s first two medium-sized expedition cruise ships have now started their season in Spitsbergen – in spite of all restrictions and difficulties connected to shipping in times of the Corona crisis. Yesterday (Friday, 17 July), Hurtigruten’s MS Spitsbergen started her first trip. This may not be too much of a surprise, as tourists from Scandinavian countries (expect Sweden) were allowed into Norway already from 15 June, and around that time the Norwegian government made first steps towards permitting ships with a capacity of up to 500 passengers to sail again in Spitsbergen’s waters. This was and is, in theory, valid for all ship owners, but in practice, it could well be understood as a “lex Hurtigruten”, or at least it is not a surprise that the Norwegian company is the first that is practically able to take advantage of it. 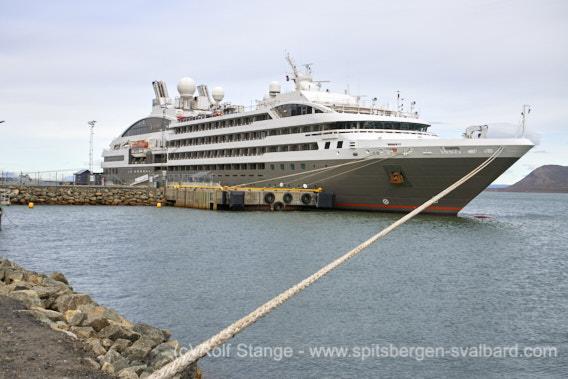 Ponant’s ship Le Boreal on 18 July as the first non-Norwegian cruiseship in the port of Longyearbyen.

The French company Ponant followed on day later with Le Boreal, although the information that tourists from most EU/EEA countries are allowed to travel to Norway again is just one week old; the list of “green countries” was published on 10 July.

And the company’s earlier drafts of the mandatory health safety plan is said to have had its weaknesses. According to Svalbardposten, the local disease control official had expressed beyond doubt to be unhappy about several issues. Ponant, however, seem to have improved their papers and the Sysselmannen have given their thumbs-up and Le Boreal is allowed to sail and operate several trips over a couple of weeks in Svalbard waters. Passengers are flown in and out of Longyearbyen with scheduled flights, as no charter flights are currently permitted at Longyearbyen airport.

There are, however, a couple of conditions that every company considering cruises in Spitsbergen currently has to deal with: amongst others, only half of the passenger capacity of any ship – 264 beds in case of the Le Boreal – is permitted to be used.

The Le Boreal passengers had to be tested negatively for Covid-19 prior to their departure from home and again before disembarkation in Reykjavik, for the first cruise that finished yesterday in Longyearbyen. In case of Covid-19 cases or suspicion on board, the ship has to sail to Tromsø and not to Longyearbyen. It will be interesting to follow the further development and the reaction of other companies, but it seems likely that many, especially those operating small ships, will find it difficult if not impossible to operate under these conditions, also considering economical aspects.

But there are, as always, exceptions to the rule: the small expedition ship Origo has already carried out her first trips in Spitsbergen. But she had spent several months of waiting at anchor for a chance to start sailing near Longyearbyen.