The legal case of the polar bear that was shot in 2018 by crew members of the German cruise ship MS Bremen is closed, as the Sysselmannen informed in a press release on Friday. 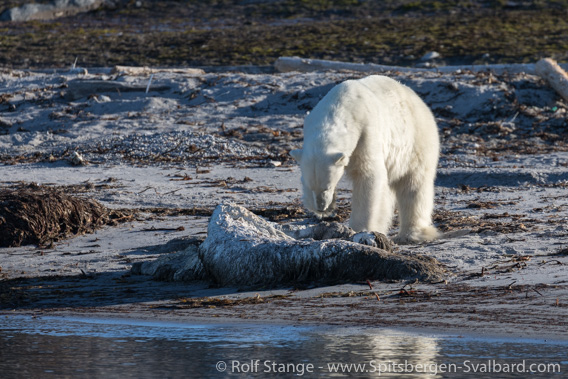 Polar bear on Phippsøya, feeding on a carcass.
It was most likely this bear that was shot
by crew members of MS Bremen in this place 11 days later.

The incidend happened on 28 July 2018, when 14 crew members of MS Bremen went ashore on Phippsøya, which belong to the islands of Sjuøyane, to prepare a landing for passengers. The group included the expedition leader, four polar bear guards, a photographer and other crew members. Two polar bears guards were soon sent out to check a part of the terrain that could not be seen from the landing area. They met the polar bear which had been hidden in a terrain depression. The bear attacked one person, who suffered head injuries. The bear did not stop the attack in spite of several warning shots being fired, so two persons fired in total three shots against the bear which killed him. The person who was attacked survived with minor injuries.

The photographer took photos of the event, which hence was well documented and easy to reconstruct.

Now the public prosecutor of Troms and Finnmark (north Norway) has decided to close the case. Shooting a polar bear is principally illegal and under punishment, but this was now officially found to be a case of self defence.

The case that had been opened against the company was also closed. Here, the companies safety routines had been investigated.

The investigations were finished in November 2019, but competence between different authorities was initially unclear and then the Corona crisis led to further delays.