The series of sad news from Spitsbergen does not stop. On Wednesday, a polar bear died in connection with anaesthetisation for scientific purposes, according to the Sysselmannen.

The incidend happened in Wijdefjord during the routine autumn campaign to mark polar bears. In this process, bears are anaesthetised with tranquiliser guns from a helicopter to mark the animal and for other scientific purposes, usually including weighing and taking samples. The bear that died on Wednesday was bear number “30 or 31” of the current campaign.

So far it is only known that the bear did not survive. It is not yet known in public when in the process and how and why exactly he died. The Sysselmannnen opened a case to investigate the incident, so no further details have been released at the time of writing, for example concerning the question if a vet was present or not.

The routine to regularly anaesthetise a larger number of polar bears, involving a helicopter chase, has met criticism already before. According to Jon Aars, leading polar bear scientist of the Norwegian Polar Institute, it is common to “lose” 2 to 4 bears in 1000 anaesthetisations. This was the third time since 2003 that it happened to Aars, as he told Svalbardposten. According to Aars, marking bears is justified by the worth of the data thus obtained for scientists. 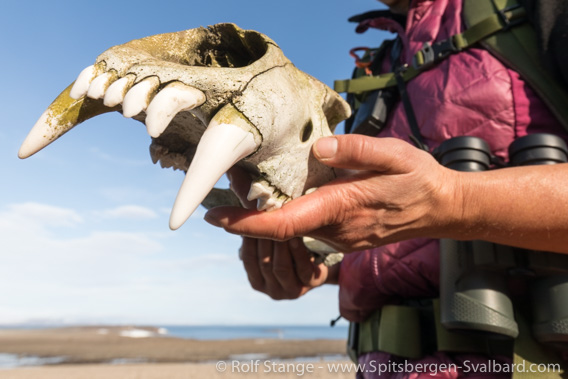 Meetings of humans and polar bears have already cost the lives of 4 bears and one person in Spitsbergen this year.
(The photo is symbolic: harmless find of an old polar bear skull in Hinlopen Strait).

It is already the fourth incident this year where a polar bear died during or after contact with people. There was, of course, the recent fatal attack of a bear on a man at the campsite near Longyearbyen, where a man and a polar bear died. A bear was shot by the police in early January although there was no immediate danger. And in late January, an anaesthetised bear died during helicopter transport away from Longyearbyen. It seems that the latter case has not been handled well and the incident attracted substantial criticism and raised a number of questions, for example if a vet should be present during such operations. It has not yet been revealed if a vet was present when the bear died in Wijdefjord on Wednesday.