September is generaly the months with the lowest sea ice cover in the Arctic: the summer warmth has melted a lot of ice, and the cold of the winter is yet to come. So is is normal to expect little drift ice near Spitsbergen in September.

BUT – what does “little” drift ice mean? Even just a quick glance at the long-term development reveals a clear trend towards less and less ice. Arctic sea ice is monitored since 1979, and never has there been as little ice as in September, following a summer that has brought Longyearbyen record-breaking temperatures and a hot summer also elsewhere in the Arctic, such as Siberia, to mention just one example. 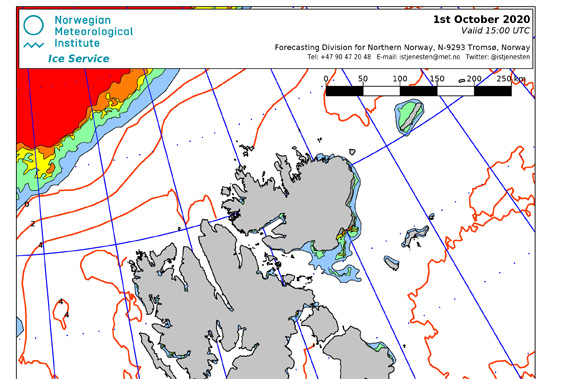 According to a press release by the Norwegian Meteorological Institute, the monthly temperature average for September for the whole Arctic was 2.9 degrees above the long-term average, which is based on the reference period 1961-1990. When a new reference period will be introduced in 2021, based on the three decades from 1991 to 2020, the temperature deviations will appear less dramatic. But this will be no reason to declare the current climate change history, it will just be a different perception due to a new statistical reference period. An artefact, in other words. 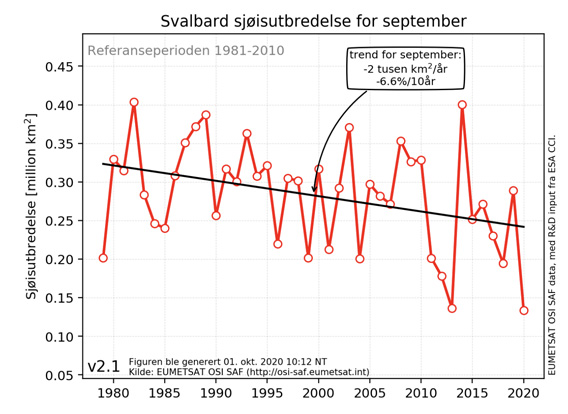 Changes of the sea ice cover in Spitsbergen from 1979 to 2020.
September 2020 has yielded a new all-time low.
© Norwegian Meteorological Institute.

Signe Aaboe, scientist at the Norwegian Meteorological Institute, does not doubt that the recent record values of arctic temperature and ice are due to man-made climate change.